Congratulations to the team of Patrick Duffy of ECLBC, Duncan Farrell of ECLBC and Yatish Uchil of NYLBC, who went undefeated ( 5-0 ) in the 2017 Hall of Fame Triples.

There was a 3 team playoff of 8 ends for 2nd and 3rd for teams that finished 3-2. In the first game the team of Sam Johnson, Veronica Sum and Frances Shen defeated Maurice LaFond, Scott Snyder and Robin Goldman, both teams representing ECLBC. In the final game we had some real excitement as Sam's team came back from a 13-3 deficit after 5 ends to fall short 15-14 after 8 ends to the team of Ed Last, Alex Last and Michele Arculli, all from ECLBC. 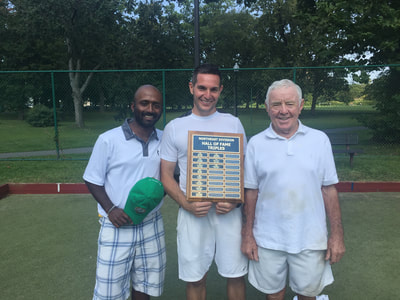 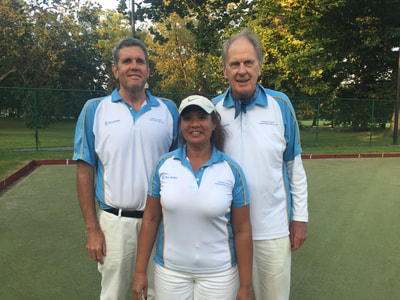 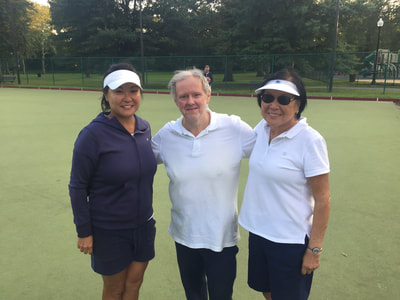 2017 NED OPEN TRIPLES RESULTS:
Congratulations to the 2017 NED Open Triples winners: Frances Shen, Veronica Sum and Scott Snyder of Essex County Lawn Bowling Club (ECLBC) against Susan Berg of Williamsburg, Sven D. Berg of Williamsburg and Sam Johnson, who were both undefeated with a 5-0 record going into the final playoffs. It was an exciting and very close final. Playoffs for 3rd and 4th were played between two teams with a 4-1 record. Bob Patterson of ECLBC, Patrick Duffy of ECLBC and Jurgen Fessler of Canada defeated Russ Sheldon, Jeri Spann and Gary Mosso of Frick Park. 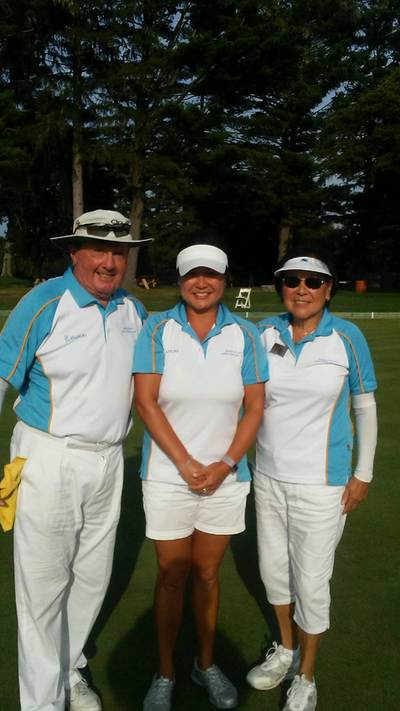 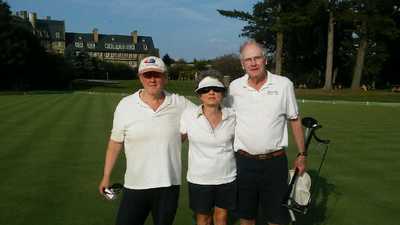 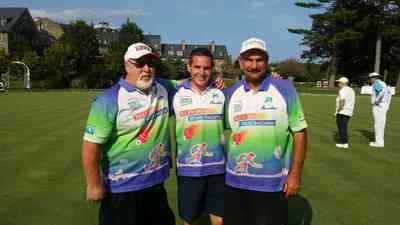 2017 NED Open Triples 3rd Place (l to r): Bob Patterson (Lead), Patrick Duffy (Vice) and Jurgen Fessler (Skip)
2017 NED OPEN PAIRS RESULTS:
Congratulations to Bob Patterson and Patrick Duffy of Essex County Lawn Bowling Club, who defeated Frances Shen and Maurice Lafond of Essex, as both teams had to play a final playoff since both teams were undefeated with a 5-0 record. 3rd place went to Robert Behncke of Milwaukee, WI and Jurgen Fessler of Canada and 4th place went to Tony DeCarolis and Wick Hall of Frick Park.
This is Frances' second consecutive placement in the NED Open with her 1st place win in Triples and her 2nd place win in Pairs! Awesome accomplishment! 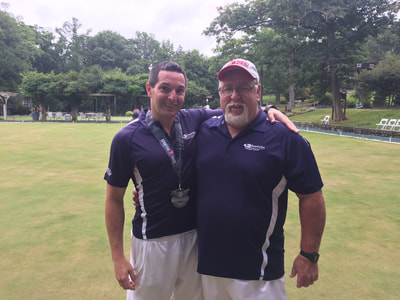 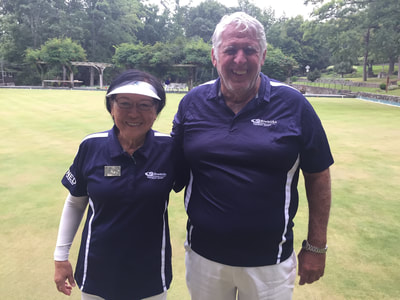 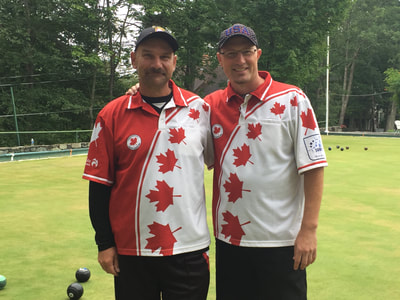 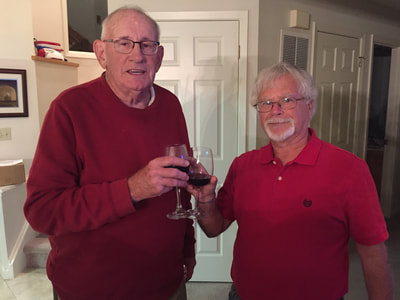 2017 NED OPEN SINGLES RESULTS:
Congratulations to Derek McKie of Canada, who won our NED Open Singles today at Skytop in PA with a 6-0 record. Derek has only been bowling for 2 years and searched for a tournament he could play in the US. We are pleased he and others from the Midwest and Florida participated in our tournament.
There were five players with 5-1 records that had playoffs with eliminations.
2nd place: Ruble Hastu of New York Lawn Bowling Club
3rd place: Yatish Uchil of New York Lawn Bowling Club
4th place: Colin Smith of Essex County Lawn Bowling Club

​Thank you again to Buck Hill and Skytop for hosting such a great tournament and all of their hospitality! We look forward to having the 2018 NED Open back there again! 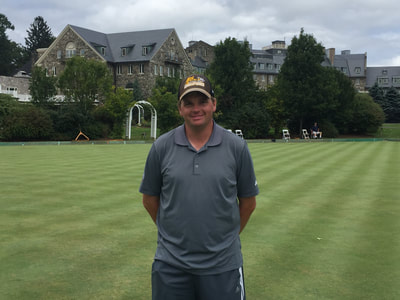 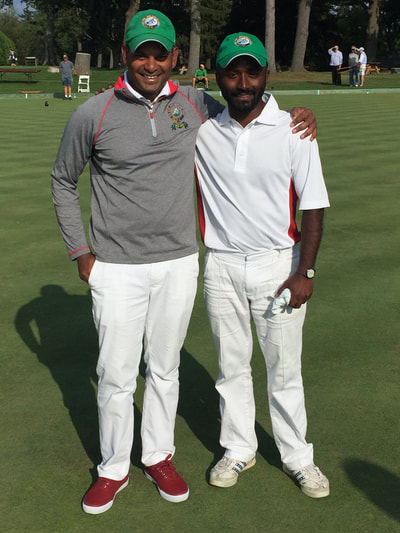 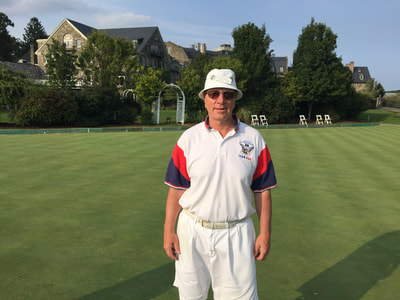 Thanks to all the came out for the day and to Frick Park for hosting. 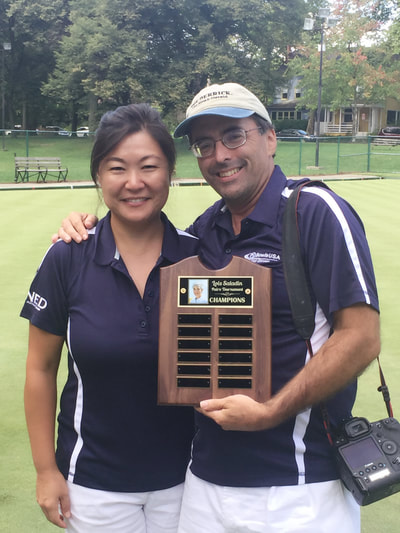 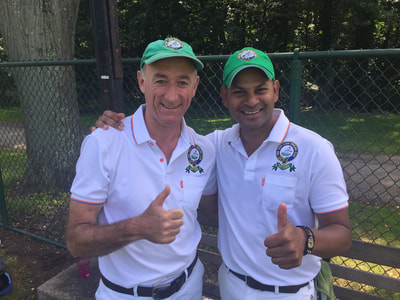 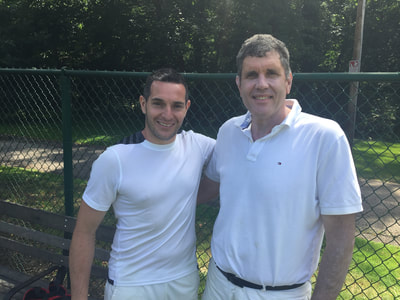 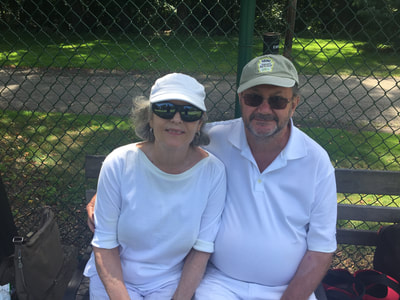 Congratulations to Maurice Lafond & Jerry Demello of Essex Lawn Bowling Club (ECLBC), on winning the Drevitch Pairs which was re-scheduled to a 1-day event with 4 games due to the weather forecast. They were undefeated and had the best plus points with 34.
In Second place were Ryan Hastu and Joe Kelly of NYLBC, also undefeated but with lower plus points.
Third place went to Patrick Duffy and Alan Winson of ECLBC with three wins and a tie with Les Winter & Yatish Uchil with the best plus points from the three wins.

Thanks to NYLBC for hosting and all who played. 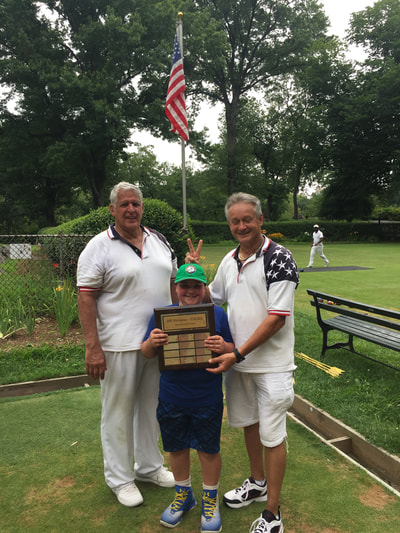 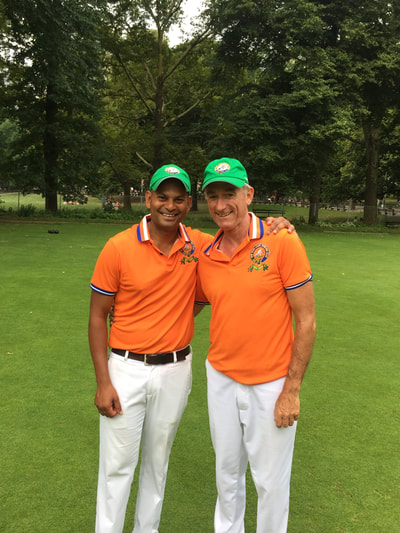 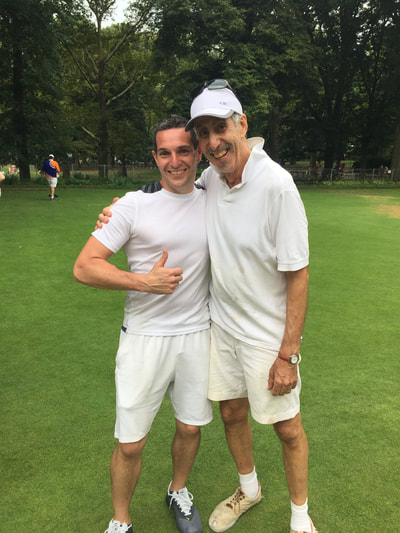 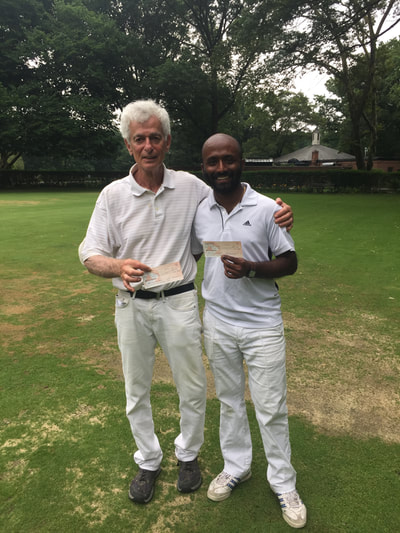 Congratulations to Michele Arculli of Essex Lawn Bowling Club and Dan (Sven) Berg of Williamsburg, VA for winning the Ladies' and Men's Singles Playdowns.  They will both be representing the Northeast Division in October at Newport Harbor, CA at the National Championships.
NOTE: This will be Michele's 9th appearance representing the NED at the National Championships.

Another great showing for our 2nd NED Tournament of the year with 18 Pairs teams. Thank you for everyone's participation and support. 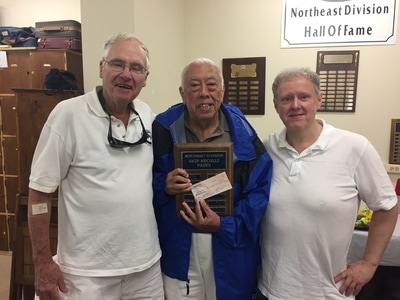 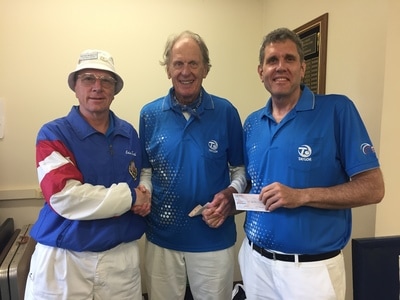 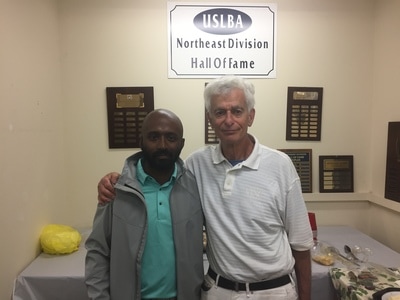 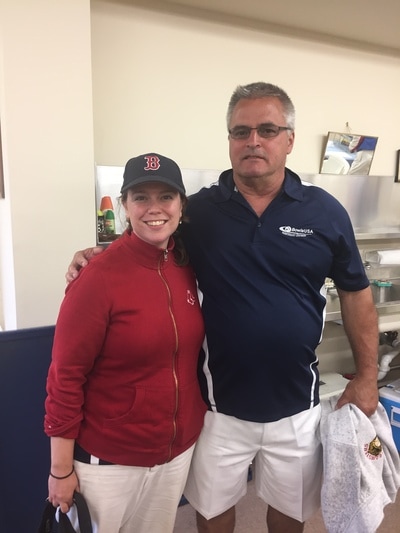 Congratulations to the winners and all that participated on what was an unusually cool weekend at this year's first NED tournament, hosted by Dupont Lawn Bowling Club in Wilmington, DE.  The 2017 Ron Buck singles had 24 entries/bowlers. 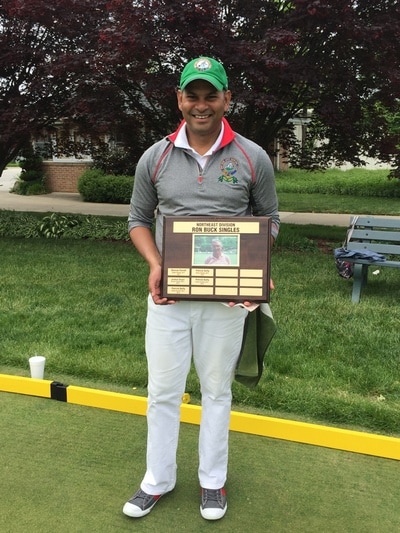 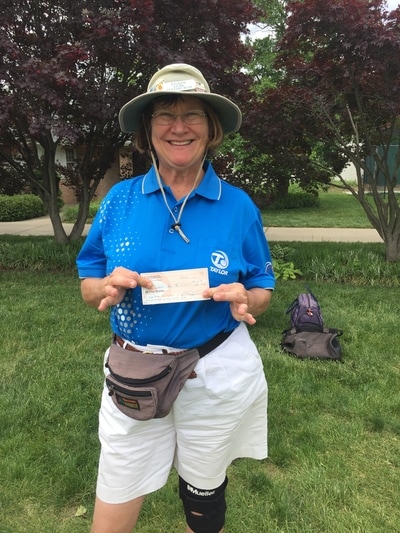 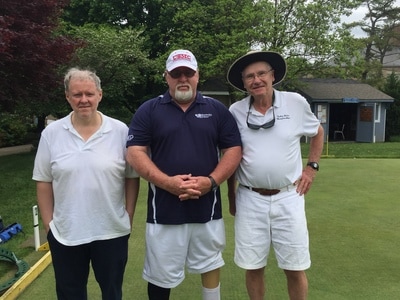