We had a great tournament at the 2016 Hall of Fame Triples at the New York Lawn Bowling Club (NYLBC) in Central Park this weekend. Thank you to all the participants and NYLBC for hosting a fabulous tournament. The greens were running great between 10-11 secs!

Congratulations to the winners...1st place: Mike Albanese, Yatish Uchil and Les Winter with a 5-0 record ; 2nd place: Barbara Roberts, Mike Armstrong and Ron Forlenza with a 4-1 record; 3rd place: Veronica Sum, Barry Kessler and Alexander Last, who had playoffs with Annette & Bill Borowitz and Maurice LaFond as they both had a 3-2 record.

Congratulations to Dan Berg of Williamsburg, who finished undefeated to become the NED representative at the US Championships in October. Michele Arculli of ECLBC will represent the women.
2016 NED OPEN IN FRICK PARK, PITTSBURGH, PA
August 6-11, 2016
We had a great turnout with 13 triples, 15 pairs and 16 singles entries.
The weather was very hot and the greens were a lot faster than expected with the exception of the last day due to 1.5 inches of rain late Wednesday afternoon.

Thanks to our host club Pittsburgh and all of their workers. We had a great time.

We had 16 teams for the Drevitch pairs at the weekend. The weather was great ( a little hot ) and the greens bowled very well.
After 5 rounds of play we had 3 undefeated teams and one team with a single loss who finished 4th.
In the playoffs Ryan Hastu & Joe Kelly from New York Club defeated Russ Sheldon & Jeri Spann from Pittsburgh. In the final Patrick Duffy & Burl Roller from Essex defeated Joe & Ryan 8-3.

Congratulations to everyone and a special thanks to Skytop for their great hospitality.

5 men and 2 women's teams turned out in NJ for the US Pairs Playdowns.  The 90 degree heat wave ended just in time and we had a high temperature of 71 on Saturday, 84 on Sunday.

Congratulations to Patrick Duffy & Burl Roller of ECLBC, who went undefeated in a round robin format. In second place was Dan Berg of Williamsburg and Sam Johnson of ECLBC with just 1 loss.

For the ladies, Veronica Sum and Frances Shen of ECLBC defeated Eileen Luba and Rusty Hein in a best of 3 contest.

Both winning teams will represent the NED in Arizona this October.

​10 teams turned out in Dupont on Saturday June 25 for the Miller pairs. While the green was slow (between 8.5 to 9 secs), it played very well and the weather was good.

Congratulations to Joe Kelly & Ryan Hastu from New York who were 5-0 in their games. Eileen Luba and Doreen Alexander from Pittsburgh finished second with a 4-1 record.

Congratulations to all that played and a special thanks to the Dupont Country Club for their hospitality. 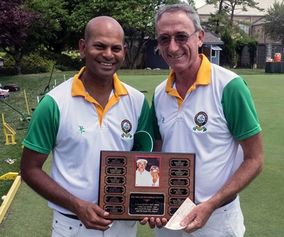 The Ron Buck Singles was played on Saturday June 4th at Dupont LBC in Wilmington DE. Due to the poor forecast for Sunday it was decided to shorten the event to a single day. We played 4 rounds of 15 points and Patrick Duffy was the only undefeated bowler.

4 bowlers finished at 3 wins and 1 loss and played 10 point games to determine the other places. Dan Berg defeated Joe Kelly and Eileen Luba defeated Jerry Demello. After a 2nd round of playoffs the final results were :

Thanks for all of the help in putting out/away the boards. Teamwork makes the job so much easier.

Thanks also to Betty Lou Buck who presented the plaque and also augmented the prize money.

Thanks also to Tee and the Dupont club for hosting.

We had 10 teams for the Arculli Pairs this year. A smaller turnout than in previous years, possibly due to the weather forecast.  We were able to play a normal format without interruption for rain, although there was some rain on Saturday night.

Patrick Duffy & Duncan Farrell won for the second straight year despite a tie in their opening game.