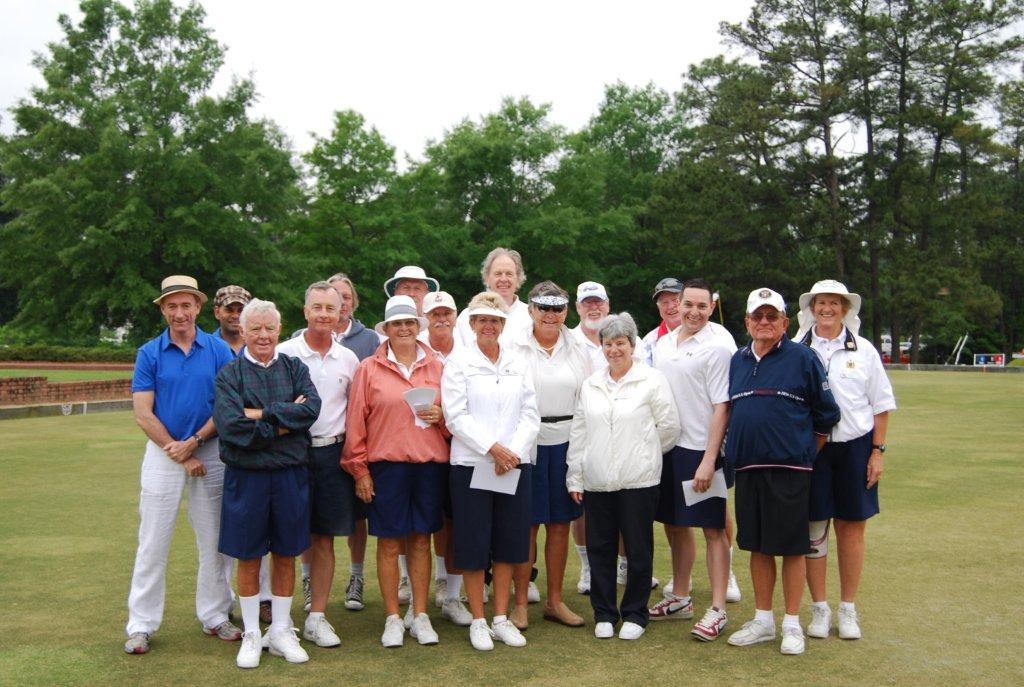 The American team consisting of members of the Northeast and Southeast divisions of the United States Lawn Bowls Association WON the inaugural Maritime Challenge Cup by the final score of  59-13 (out of 72 possible points)..Congrats to our members and friends from the Southeast on some great bowls and representation of United States and East Coast bowls!  Read more about the games origin, the tournament and view more photos from the event below!

An account of the inaugural Maritime Challenge Cup
Competition between the Maritime States of U.S
and Maritime Provinces of Canada

Tournament Director Tom Kees opened the match with a welcome to all bowlers. Ron Lloyd, Director of Lawn Sports for Resorts of Pinehurst and George Tucker PLBC offered opening remarks. Captain Pat Beggs, Canada introduced the Canadian team and Co-Captains Linda McDougall from the SE division and Patrick Duffy from the NE division introduced the members of the United States team. Duncan Farrell and John White each sang their respective national anthems. Bob Patterson from the NE division led all in the pledge of allegiance to the flag.

We had the traditional Spider which was won by Dagmar Bridgman, Canada.

Day #1 saw competition in Singles and Fours.
The U.S. team dominated the first round by winning 5 of the 6 matches. Round #2 produced another strong performance by the U.S. Team winning another 5 matches out of 6 played. Round #3 featured 3 wins in Singles and 2 in fours. At the end of the first day of competition, the United States had a commanding lead of 30 points while Canada scored 6 points.

Day #2 featured competition in Pairs and Triples.
Round #4 saw the U.S team winning 3 games with 1 game tie and the Canadian team took 2 games and 1 tie game. Round #5 saw the U.S team winning all 6 contests. Round #6 produced 5 wins for the U.S. squad.
The final scores while heavily in favor of the U.S. squad, it should be noted that many of the games were decided by fewer than 3 points.
The closing ceremonies featured the familiar friendly camaraderie between bowlers who had a good time and great competition. The Canadian team promised to return next year loaded for bear!