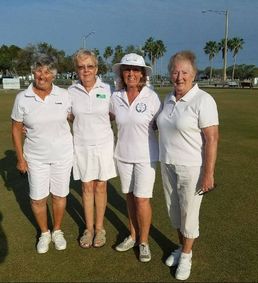 The South Central Open was held in Sun City, AZ from Feb 11 to 16, 2017. This specific tournament always brings in some competitive fields in Bowls USA play for both men and women.  Sun City offers the best greens in the country and it also helps that the weather is beautiful, usually sunny and in the mid-to-upper 70's. It definitely makes the trip worthwhile!

Patrick Duffy played in both the Triples & Pairs events. In Triples, his team, which comprised of Jurgen Fessler of Canada and Scott Roberts from SWD, was undefeated in the quarterfinals and lost to the eventual overall winners from Seattle, who played great!  Patrick's team then dropped to "A" flight and played two more super hard teams.  Beating Keith Roney & his Canadian teammates in the semis, moved Patrick's team to win "A" flight against a Californian team led by Grant Shear as skip.

In Pairs, Patrick teamed up with Keith Roney of Canada and they lost in the "B" flight final.  They played great the second day to beat great teams, but ran out of steam in the final that started out close 3-3 after 5 ends, but got away quickly soon after to Hugh Branston & Rick Marinaccio.

CONGRATULATIONS to Patrick Duffy for a successful showing!

Read all about the World Bowls Championships (Nov 29 - Dec 11, 2016) that took place in Christchurch, NZ through Scott Robert's Blog, who was part of Team USA!
Check out some videos of the Finals at the 2016 World Bowls with some of the greatest bowlers around the world!

Institution of new fliers and business cards for use at some clubs in 2014...

We developed a new promotional flier and business card that will hopefully help spread a positive awareness of our sport around the communities that have bowling greens. This is our first new step towards working with clubs to build membership.

The fliers are tri-fold and are meant to be used in combination with the business card with each club's contact. Currently, Frick Park, Essex and Fernliegh LBCs have been issued cards and we will work to get more clubs involved.

You can click on each individual image on the bottom to enlarge.